The Cajun Chicken Breast recipe is a very versatile dish.  I have paired it with lemon sauce or mushroom, white wine cream sauce plated with potatoes and vegetables for a delightful flavor packed meal.  Last night I tried a new angle, serve the chicken breast on a bed of onions sauteed golden brown in butter and paprika.

This was delicious!  The sweetness of the fried onions tempered the heat of the Cajun spice and gave the dish a whole new flavor profile.  We will definitely have this again. I cut the onion in half then sliced up each half and put in a hot pan with plenty of oil and a pad of butter.  Add salt, pepper and paprika and stir occasionally.  I start onions like this on high heat but quickly turn down to medium low once they are sweated or softened. The low heat lets them turn golden without becoming papery. Plate the fried onions and place the chicken on top.

For saucy variations fry the sliced mushrooms in some butter and set aside. For both lemon and mushroom sauce start out with 1 teaspoon of flour and at least a tablespoon of oil. You want just enough oil to cream all the lumps out of the flour then put the pan on medium heat. You need to cook off the flour taste so let it sizzle for a minute or two. For a gravy or cream sauce you can cook the flour to a golden color if you like.  This will add to the flavor but weaken the thickening ability of the flour so you need to start with more. Experience will teach you how much.

When the flour is cooked take it off the heat and add a few tablespoons of chicken stock then whisk.  Add enough stock to get the lumps out and put it back on medium low heat.  Add a teaspoon of lemon juice or tablespoon of white wine, depending on which sauce you are making and some seasoning. If it's pasty add some stock and taste a bit.  You want a light lemon taste or a fruity wine taste with just a bit of acid. If you add too much lemon or white wine it will become too acid and you'll have to add sugar to balance it.  Then you have gone from savory to sweet and sour sauce.  If you need more liquid add chicken stock or water.

For lemon sauce put a couple of tablespoons of sauce on the plate and put the sliced chicken on top.  For white wine sauce add the mushrooms and a tablespoon of heavy cream then cook them in a minute or two.  Plate the mushroom sauce over top of the chicken breast.

There you have 3 different meals that all use chicken cooked exactly the same way.

It took several tries to get Vanilla Fudge correct.  I didn't know what I was doing at first so it failed.  The recipe I had was misprinted and my fudge failed again. I think there was another failure in there somewhere but in any case, I finally got it right yesterday.

Start with an 8x8 or 9x9 pan and fill with parchment paper that is then sprayed with oil or buttered.  In a pot put

Stir and bring the mixture to a rolling boil and keep it boiling till the temperature hits 114C or 238F, which will take about 10 minutes.  It doesn't need to be stirred constantly but you can scrape the sides of the pot occasionally.

When it gets to temperature take it off the heat and add 1/4 cup of butter and keep stirring it constantly. Once fudge comes off the heat it must be stirred constantly until it cools below the melting point of sugar. The stirring prevents large sugar crystals from forming and making the fudge grainy. When the butter is mixed in add 1 or 2 teaspoons of Vanilla extract and keep stirring.  After a few minutes the fudge mixture will lose it's sheen and this is when you can pour it into the square pan and let it set. 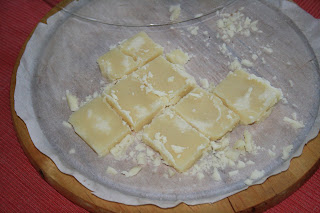 I cut it up on the parchment and place it on the plate then put the bell on it and cut the paper off all around. I'm not sure if the crumbling and white spots are over cooking, I'll try it a little cooler next time.  In any case this stuff is a bit like white chocolate, yummy!

The other day I got to the market later than usual and the 4-6 Daily Special was on, 2 fresh pork tenderloins packaged together, half price. So I got 2 tenderloins for $7! I brought them home and put one in brine and the other in a container in the fridge for later in the week.

For dinner last night I took the brined tenderloin and cut it into almost one inch medallions. I chopped up 3 cloves of garlic and a tablespoon of fresh oregano.  One quarter of the garlic and oregano went into the medallions with some oil and salt and pepper.  Slice up 2 or 3 mushrooms and fry them then put them aside.  Put a tablespoon of oil and a teaspoon of flour into a small sauce pan and mix into a smooth paste then turn the heat on a bit more than medium.

I'm assuming you have potatoes and vegetables prepped and started on the stove.  I happened to be pairing this with broccoli which also tasted great with this sauce. While you cook the flour taste off get the chicken stock and white wine ready.  Whisk a couple of tablespoons of stock into the cooked flour, add enough to make a thin paste.  Then whisk in white wine till you have a thin smooth sauce and put it back on the burner.  Add the remaining garlic and start your pork medallions frying while you start boiling down the white wine.

This was the first time I had boiled down wine into a sauce so I was surprised at how acidic it became. I added as much salt as I dared and it was still too sharp. I couldn't add sugar, partner doesn't like sweet sauces, so I added a tablespoon of whipping cream.  That did the trick.  Add the mushrooms and a couple of minutes before serving I added the remaining oregano to the sauce.

I put a little sauce over the tenderloin and a few drops on the broccoli, it was delicious and I will be making it again.

It is really easy to fall into the trap of continually making the same thing or rotating through a small repertoire of dishes.  Cajun spice on chicken and fish is delicious but it becomes monotonous when it is prepared the same way repeatedly.  My last chicken dish I tried something a little different, I shake'n baked it with flour, salt, mixed pepper corns, poultry seasoning and paprika. Rather than searing it I sprayed it with oil so it would brown evenly.

While everything was cooking I stood in the kitchen thinking I have time to make a sauce but I don't want another lemon sauce.  What would go with the seasoning already on the meat?  I couldn't come up with a single idea. In hind sight I could have made honey mustard or ginger or garlic sauces but that isn't much to choose from

The problem isn't lack of ingredients, it's that I haven't tasted enough really good sauces to develop a well of ideas to draw from. I'll have to make a point of trying new sauces when I go out for dinner. In any case the chicken was good but really did cry out for something, anything, to give it a little zing.

The next evening we had pork chops with a mustard brown sugar sauce.  It might have flown if I hadn't used so much dijon mustard to start.  That meant I had to use a lot of sugar to bring down the bitterness.  Unfortunately bitter sweet works better in relationships than pork chops. I added mushrooms sauteed in butter but it just wasn't enough.

Feeling a need to redeem myself, next evening I made Cajun chicken with a delicious simple lemon sauce.  It was wonderful and I was back on culinary track. I'm going to make a point of trying garlic and ginger sauces next.
Posted by Doug Webb at 12:25 PM No comments: