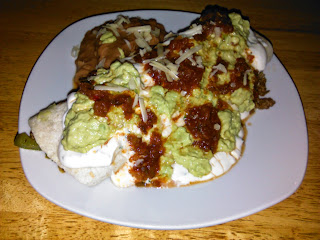 It looks like it's suffering a bit of droop but the flavour is all there.  I started with an onion, diced and sweated. Then 3/4 lb lean ground beef went in with salt. I browned it while breaking it up. Next one tablespoon of taco seasoning over the meat, followed by a little flour.  I let that cook for a minute then added a packet of beef stock and at least 1/2 cup water. Let the water boil off while a diced green pepper cooks in the meat.  I had two plates warming in the oven, I put the soft taco shells on the plates to warm up.

Refried beans at the back there. I added Tabasco sauce and sour cream and a few drops of lime juice to the refried beans. It helps to start with premium refried beans like Old El Paso.

The sour cream has fresh chives and a few drops of lime juice in it.

Mash the avocado with a fork and combine with other ingredients.

Salsa on top was Fern's that I heated in the microwave. When everything was ready I filled soft tacos with beef and laid grated cheddar over the meat and rolled it up. Refried beans on the side. Sour cream and chives mixture on the taco shell. Next the guacamole, followed by the heated salsa. The last bits of cheddar sprinkled over the plates. That was it!

Fern remarked several times how good the food was so I'll definitely make this again, as it's the only way to get beef in the menu without complaint.